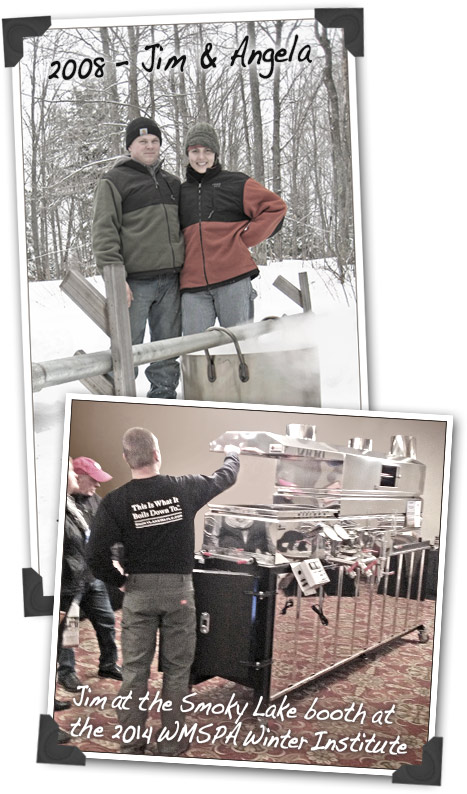 In 2008, our lives were changed forever when I asked Jim, “Do you have any maple trees on your land?” Never in a million years would I have guessed how this question would completely change the trajectory of our lives.

At the time I was an Art Director working at an advertising agency in Sheboygan, Wisconsin and Jim was a licensed plumber in Kaukauna, Wisconsin. We worked our full time jobs during the week and then reunited on the weekends to make maple syrup at Jim’s cabin, nestled between the shores of Big Smoky and Little Smoky Lake in Upper Michigan.

While we did enjoy the hard work involved in making the syrup, Jim was obsessed with increasing our efficiency. Every year, he took what he learned and improved upon the year before. By 2011, his pans were so efficient, the mass amounts of steam billowing from the yard led several neighbors to believe his wood shed was on fire.

In 2011, Jim quit the security of his full time job in plumbing to pursue his passion of working in the maple industry. It was not long before the equipment he was crafting was raising eyebrows across the United States and Canada. The skillful welds and attention to detail are a thing of beauty.

Over the next few years, Smoky Lake Maple Products would come to manufacture the most efficient raised flue pans in the industry. Jim is also constantly developing new products such as a one-of-a-kind preheater system and a steam bottler which was soon mimicked by a large Canadian manufacturer. In early 2014 Jim also released his own line of auto draw-off systems whose high quality construction effortlessly eclipsed that of the leading competitor brand. In late 2014, Smoky Lake released and patented the Murphy Compensation Cup, a revolutionary invention for the maple industry which simplifies density testing.

After all these accomplishments, we feel we are just getting warmed up. The sky is the limit. We are a small company but we have big ideas. We love this industry and it drives us to continue innovating, improving and moving forward. This is what it boils down to…™

Smoky Lake Maple in the News