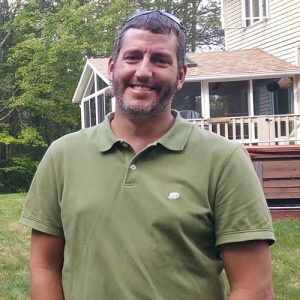 It all started back in 2010. Bert and his family were living in Vermont at the base of Round Hill. He started by tapping 12 trees with buckets and then bringing the sap to his friend’s house to be boiled. Soon later he increased to 60 taps on buckets… Then 145 taps on tubing… One thing was for sure. Bert had gotten maple fever.

Last year, the Stewart family moved to Mendon, Massachusetts, and they brought their love of maple with them. Though their region of Massachusetts contains a relatively low number of maple producers compared to the western side of the state, Bert has connected with two other enthusiasts who tap trees in this area as well.

The 60 acres of woods adjacent to the new Stewart homestead in Mendon had maple trees in it that were just begging to be tapped, and Bert knew it. Luckily, his neighbor welcomed the idea so Bert’s love of maple syrup production can continue to grow. 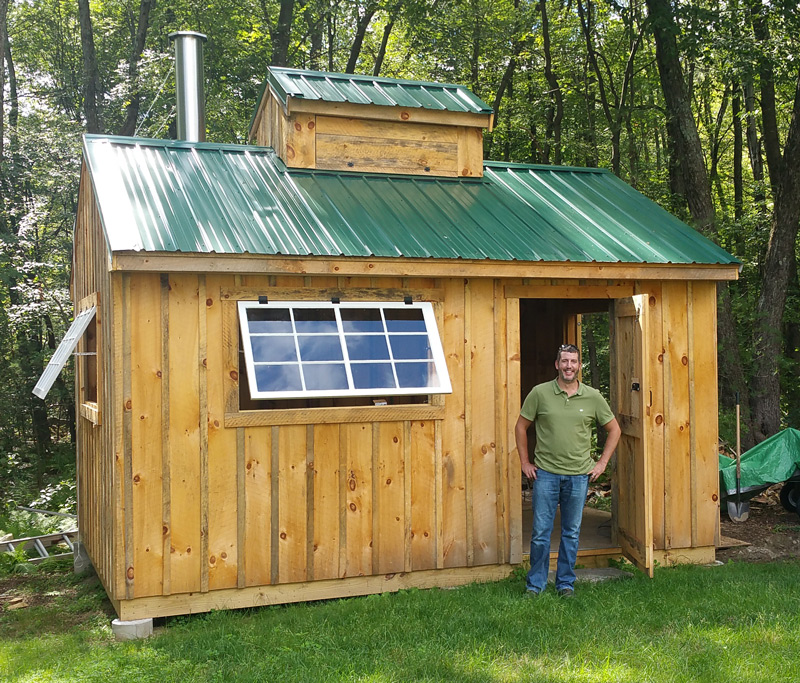 I asked Bert what his favorite part of maple season is. “Besides the beer drinking?,” he joked. Then he paused and thought about it solemnly. “It gives you a great reason to be out in the woods that time of year. It’s quiet. I like the peaceful solitude… but I also love how maple season brings people together.” Bert’s biggest helper is his 11-year-old daughter. “She doesn’t mind hard work.,” Bert said. He sounds like a very proud dad.

Next season, Bert will be putting in 200 taps and boiling on a 2 x 6 wood-fired arch in their brand new sugar house. It was fun to hear Bert and Melissa talk about the new sugarhouse. For example, the pulley system to open and close the cupola doors had been challenging to fabricate. Also, I admired their resourcefulness as they mentioned that the sugarhouse windows had been repurposed from an older building. Melissa has plans to add flower boxes and other landscaping. Bert has plans to construct a lean-to to store their wood. 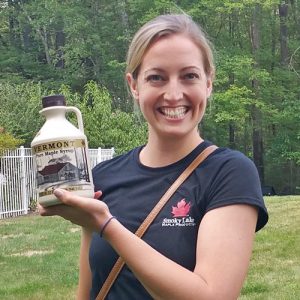 Jessica holds up a quart of delicious maple syrup which the Stewart Family had made at their previous home in Vermont.

The Stewart family sells all of their syrup through word of mouth and they have been making enough money each year to make improvements with their equipment. Bert’s next step will be to set up tubing on the new woods and also to add vacuum. After that, he would like to invest in an RO system. It looks like Miscoe Hill Maple will be continuing to grow for many years to come.

Thank you for inviting Jessica and I to visit your sugarhouse. You have given us so much great advice on trails and scenic routes in your area, that I am sure we will be visiting the Northeast again in the near future. We had a great time.

Best of luck to you as your maple operation continues to grow. We wish you a fun and bountiful season in 2017.