Home / Knowledge Base / How Does A Divided Pan Work?

Divided pans contain a series of connected channels. Raw sap is continuously being added at the back corner of the pan. This new, raw sap, pushes existing sap further into the system. After you have boiled for a while, you will establish what is called a “density gradient”. The “starting point” of the channels will be the raw sap while the sap that is closest to the draw-off valve will be darkest and the highest sugar density. All the sap in between the starting point and ending point is somewhere in between. It will be progressively darker and more condensed as it gets closer to the draw-off valve.

By watching temperature, you will be able to determine when to start and stop drawing off finished syrup. (Syrup finishes at 7ºF above the boiling point of water. See Thermometer instructions for more details.)

There are many different styles of pans that have channels/dividers in them. Regardless of whether the pan has a flat bottom, raised flues or drop flues, the dividers are there to enable “continuous flow boiling”, so you don’t have to make syrup in one big batch. The dividers allow you to draw off syrup little by little.

At the end of the season, when no more raw sap is available to maintain 2″ depth in the pan while boiling, the condensed sap remaining in the divided pan can either be finished in a smaller pot or discarded. 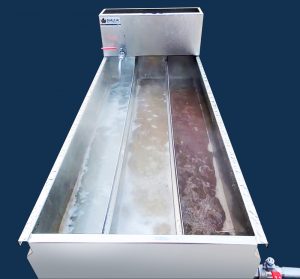 Article: The difference between a Flat Pan and a Divided Pan.

22 Responses to “How Does A Divided Pan Work?”