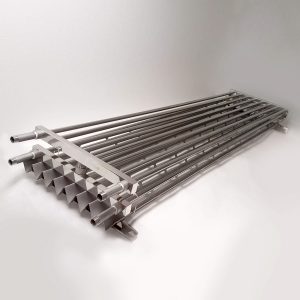 Most often, this preheater is used with a Smoky Lake evaporator hood. At the back of the hood there are four holes through which the pipes of the preheater will stick out. Pull these pipes through those holes and make sure the preheater has been slid as far backward as possible. You need to ensure that the condensation collected in the preheater’s drip tray is able to drain into your hood’s gutters. If you were to omit this step, water from the drip tray would re-enter your evaporator pan and would need to be re-evaporated.

Next we will discuss what needs to happen with each preheater pipe at the back of the hood. In this overview, we are assuming that the float box is to the right of the preheater when you are standing facing the back of the evaporator. This will be exactly as it is demonstrated in the example installation photos below. Conversely, if your float box is to the left of the preheater pipes, you may opt to hook up the preheater as a mirror image of what we are describing. For example, the top right pipe could become the top left pipe and so on.

Facing the preheater from the back of the evaporator, the lower left pipe is where your cold sap will enter the system. It is recommended to connect to a head tank that has a shut-off valve. This will allow you to close off raw sap from your system at the end of a boiling day. Just don’t forget to open the valve again the next time you start boiling!

The hot sap will exit the system and go to the float box from the upper right.

The vent can be extended up from the upper left. It will need to be taller than your head tank.

The lower right can be used as a drain. Most commonly a valve is added here. When you are finished boiling for the day, you will want to use this drain to remove the sap from the preheater. Otherwise, sap could freeze inside the pipes and cause damage.

How to Connect Pipes (Copper Install) 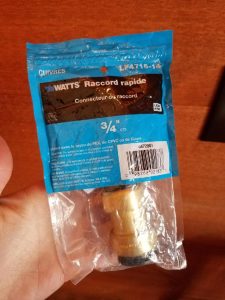 If you are using a copper Backflip Preheater, “Shark Bite” fittings are handy for making connections. They will allow you to disconnect the pipes after the season. Otherwise, if you were to solder the pipes, it would be very difficult to remove your hood at the end of the season. 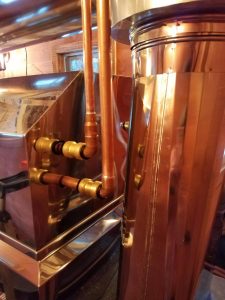 Here is a close up of the shark bite fittings in action. 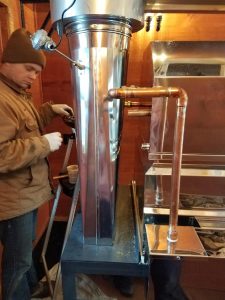 Top right pipe of the preheater is plumbed to the float box. This pipe will feed hot sap into your float box. The Smoky Lake Float Box has a 3/4″ NPT, female fitting. 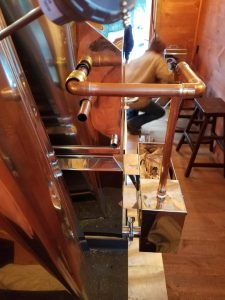 Add a valve to the drain in the lower right. This valve should be closed while boiling. Drain the system after each boil. That way the pipes won’t freeze/burst. (This photo shows the pipe before the valve was attached.)