Text and Photography by Amy Makechnie 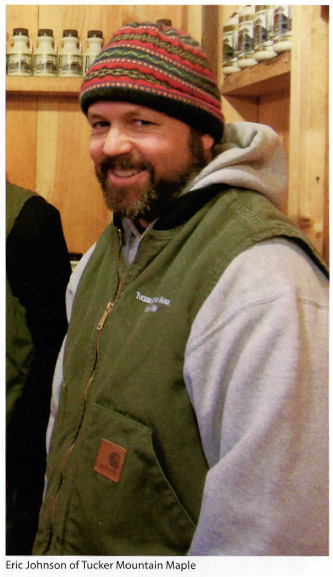 Eric Johnson knows his numbers like they’re tattooed on his arm. An Andover, New Hampshire maple sugar producer, he can tell you that in 2005, he sugared 24 gallons of syrup. In 2013, after over 400 hours of gathering, boiling, and filtering, 640 gallons were filled. 75% sold from the sugarhouse and at farmer’s markets, 10% went to a large Vermont manufacturer due to its dark grade, and 15% sold to local business at wholesale. Eric can talk sap gallons, syrup ratios, tap numbers, and dark and light percentages like any master sugar man. Maple syrup numbers provide satisfaction, fulfillment, and joy. “I love it,” Eric says. “I’ll do it for the rest of my life.”

But it’s a complex statement. Eric lives by other numbers that transcend merely syrup.

He was always an outdoorsman. Growing up, Eric swam, skied, and hiked. His employment at Proctor Academy began by leading 8-week, wilderness expeditions. He built his own timber-frame home, a tree house for his two girls, and, just for fun – a sugarhouse. He founded Tucker Mountain Maple, LLC, now an award-winning maple syrup business. Eric chopped wood, worked as a logger, and spent countless hours fixing heavy-duty machinery. Eventually he became the Program Director for New Hampshire Timberland Owner’s Association, a position he still holds, running the professional logger and education program. He was fit, young, and almost-always healthy.

But in 2011, Eric thought he must be out of shape. While playing a summer soccer game, he noticed an uncommon fatigue. He felt a little off-balance. Later that fall he noticed his hands were sometimes numb, daily tasks a little troublesome. Medical tests, however, were inconclusive.

Finally, in November of 2012, a conclusive diagnosis came: Amyotrophic lateral sclerosis, or ALS, a progressive neurodegenerative disease that affects nerve cells responsible for voluntary muscle movement. Commonly known as Lou Gehrig’s disease, ALS has no cure. Though patients are living better and longer than in the past, Eric and was given more numbers -mortality statistics.

Sitting in the kitchen of his timber-frame home, Eric says that progression is different for every person living with ALS. “Mine seems to be affecting my upper body strength and balance. In my neurologist’s opinion, I seem to be progressing on the slow side.” He optimistically taps his heavy maple counter top, always looking to what comes next. That includes the sugar business.

It started as a hobby. But the first time his family had homemade syrup at breakfast Eric realized he had made a product that had value, something people liked. “I thought ‘if I can make a profit doing something I love, why not?’”

Eric puts all profit back into the business, is constantly upgrading equipment, and avoids debt. “We’re probably middle of the spectrum for technology,” he says. “We still use buckets and modern tubing systems, but we also have systems like reverse osmosis,” a process that removes water from the sap before boiling. “It saves electricity, time, and the carbon footprint is much lower – though some people think it’s cheating.” Due to his health however, upgrades are essential. “I’m realistic about the eventual outcome,” he says of his prognosis, “but if I can do things to improve my quality of life, I’ll do it.”

Eric’s had to ask for more help. He’s had to delegate. In 2013, while Eric boiled and filtered in the sugarhouse, partners Mark Cowdrey, Dave Swanson, and Kat Darling picked up more of the heavy lifting. Eric relied on his two daughters as well, ages 13 and 11, to collect buckets of sap.

Modifications will be made so Eric can access the sugarhouse when he is no longer able to walk. A neighbor has already built a railing for the stairs, and in October 2013, a silo was installed to store wood pellets, a more efficient burning system for the sugarhouse, saving Eric from cutting and stacking cords of wood. How long can he sustain even this system? “We’re not there yet,” he says, “but realistically, if I can get three more seasons, I’ll be happy.”

“Every person with ALS needs to have a spouse as a biology teacher – it’s great!” Eric says. Heide, a Biology instructor at Proctor Academy, has not only been his support, but helps breakdown the overwhelming medical jargon. “Epigenetics, stem cells – how you turn them on and off – all the medical options and medical trials to decipher; it’s huge,” Eric says.

“There’s so much frustration,” Heide says. “The ALS community is certainly active, but because we know so little it feels like there is an institutional helplessness. Why is it that neurons just curl up on themselves and die? Muscles atrophy when they are no longer stimulated. Why?”

Initially, Eric did ask – “Why me? Why now?” But those questions are not yet answerable. And symptoms continue to manifest. Eric feels more muscles loss. He has a harder time holding a phone to his ear. His daughters take down the cereal boxes from the top shelf, and steady him when he walks uneven terrain. Life as he knew it altered. “I try to emphasize that I’m still the same,” Eric says. “I still bug them to clean their rooms and unload the dishwasher – I’m still Dad.” Though ALS is always at the forefront, sometimes, they forget, “and that’s kind of nice, too.”

Neighbors, friends, and colleagues have helped in so many unexpected ways. A network in the forest-products industry raised funds for the family to travel to New Zealand over Christmas. “Now, it’s not about things,” Eric says. “It’s about doing things together, having shared experiences. We’ve always loved traveling, but there’s a sense of ‘let’s do it while I can still do it.’”

Sometimes it’s hard to see any upside, but Heide and Eric are both quick to point to it. “Right after the diagnosis,” Heide says, “we were reeling. But what I felt about Eric was this overwhelming feeling of love. To think about all the things that we had to do, the direction we were heading…it was like falling in love with him all over again.”

Eric smiles at her words. “I’m pretty lucky,” he says. And so the sugar man moves forward, using time the best he knows how. The numbers may be both joyful and sobering, but whether its mortality or the sugarhouse, “We’ll go as long as we can go.”