Home / Knowledge Base / Adding Sap To The Pan

While you are boiling, it is important to maintain a 2″ sap depth in order to protect your pans from overheating and also to protect your syrup from scorching. Depending on the style of pan you are using, there are many methods for adding sap to your pan while you are boiling. Some methods are more efficient — and more convenient — than other methods. Below are the different methods of adding sap and the pros and cons of each. At the bottom of this page, you will find a chart detailing which methods are possible for each style of pan. 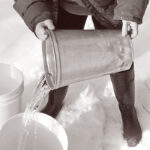 By far the most straight forward method. Simply dump a large amount of raw sap into the pan whenever the level gets below 2″ depth.

BENEFIT: For people on a tight budget, this is cost effective as no equipment is needed other than a bucket of raw sap.

THINGS TO CONSIDER: Not recommended for folks who are easily distracted. You really need to pay attention. Also, introducing a large dump of raw sap will kill the boil in your pan. It takes time to recover so this is not the most fuel efficient method. 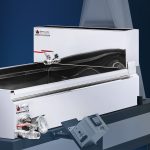 A wide, narrow pan — called a Feed Pan — sits on top of the back of the evaporator pan and filled with raw sap. A valve on the Feed Pan is cracked open and the raw sap is allowed to trickle in slowly as you are boiling.

THINGS TO CONSIDER: This still requires folks to pay attention and make adjustments to the flow of sap as needed. Also, the Feed Pan will need to be refilled with raw sap occasionally. 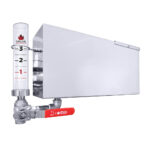 A Float Box can be set to automatically maintain the depth that you set it to.

BENEFIT: Sap is constantly being added to the pan as it is needed. Large fluctuations in sap depth are virtually eliminated which helps the pan boil very efficiently. No need to worry about adjusting valves like you do on a Feed Pan. Also, the Float Box typically attaches to a larger head tank which has a larger capacity for raw sap than a Feed Pan does.

THINGS TO CONSIDER: Certain conditions such as foam-ups can “fool” a Float Box into thinking the sap depth is deeper than it actually is. It is still recommended to visually check the sap depths in the pan(s) periodically to make sure everything is operating as expected. The photo here shows a Float Box being used with a Sight Glass. A Sight Glass is not required for using a Float Box, but they are extremely helpful.

Options For Adding Sap For Each Style of Pan

NOTE: If you are adding sap to a continuous flow system (divided pan) by hand, remember to do so slowly/continuously. In contrast, large periodic dumps of raw sap can interfere with the density gradient and kill the boil. It is best to introduce the sap to the system in a constant, slow stream.

Closed the morning of WEDNESDAY, AUGUST 17 for Channel 5 news broadcast! Tune in to see us LIVE!